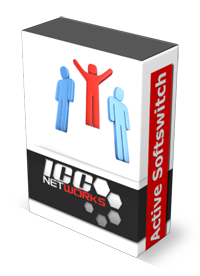 Partners who have any of the 4 Active SoftSwitch Service Plans can provide their business customers with a SIP Trunking Service. Many of their customers will have upgraded to a pure or hybrid IP PBX for their telecom infrastructure already. They will be looking for new ways to maximise their original investment and minimise costs. If they can make some additional savings through productivity, all the better.

Using a high-speed Internet connection to carry your customers' calls, can provide a significant reduction in voice and data connectivity costs, in some cases up to 30% is savable when you take into consideration the reduction of existing line rental charges.

Who is it for?

IP Telephony allows companies to significantly reduce operating costs and simplify administration by merging their voice and data networks internally. Businesses can choose to install the IP PBX within their own IT centre or connect to a leased IP PBX hosted by a third party. VoIP converts your speech into digital packets and sends them out across a data network to their destination. The packets are routed in the most efficient way possible over a data network and then reassembled at the other end to become the sound of your voice. VoIP, originally successful in the larger enterprise, is now highly attractive for all sized organisations and is now proven and mature.

It offers many benefits over conventional voice systems, including lowered Total Cost of Ownership, reduced Call Charges and improved system security and reliability. VoIP is so successful, that most of the large telecommunication operators are using it to carry their own long distance traffic. A report from Inter-stat tracked an increase in VoIP installations or the top five European counteries (by size) moving from 32% in 2009 and 76% in 2012.

♦ Eliminating the need to invest in costly TDM gateway infrastructure

♦ Accessing the benefits of a hosted VoIP service, without discarding existing investment

♦ Avoid having to purchase capacity of an entire circuit

♦ Avoid paying a premium for the flexibility of fractional circuits

♦ Requiring only one connection for both data and voice services